[Update: someone sent a link to a possibly related story which may be of interest (but which also may or may not be true): Putin: Hacked Emails Reveal That Clinton Threatened Sanders’ Wife.]

Saw this a few days ago, and am just now getting the “nudge” to post it. Although I have no knowledge about the website and no absolute validation of this (except the FB posting in the image below), it does rather “ring true” in my mind, that something did indeed happen to “make sure” Bernie endorsed Hillary. Many have pointed out that the DNC (as well as primaries leading up to it) was rigged to “put Hillary in” (including Ben Fulford, and even Matthew!), and I feel that is likely the case.

However, many times “the dark deeds” occur in order to bring Light to those dark deeds, and expose them and/or the perpetrators and/or the systems that permit them to happen. I guess we shall see.

Also I found a video some may wish to view, which clearly shows the mark on Bernie Sanders face.

A noticeable cut on the right cheekbone of Bernie Sanders has given rise to questions about whether or not he was physically beaten-up by “someone’s” goon squad during the Democratic National Convention.

Images of Sanders from Monday show no wound on his face.  However, images from Tuesday evening clearly show a gash on his right cheek, of a type one might expect from being punched by a fist which had a ring on it.

The gash is quite deep, certainly nothing like a shaving cut.  The man was clearly hit with something.

In whose interest would it be to physically assault a US Senator who is seeking his Party’s nomination for President against the wife of a former President? 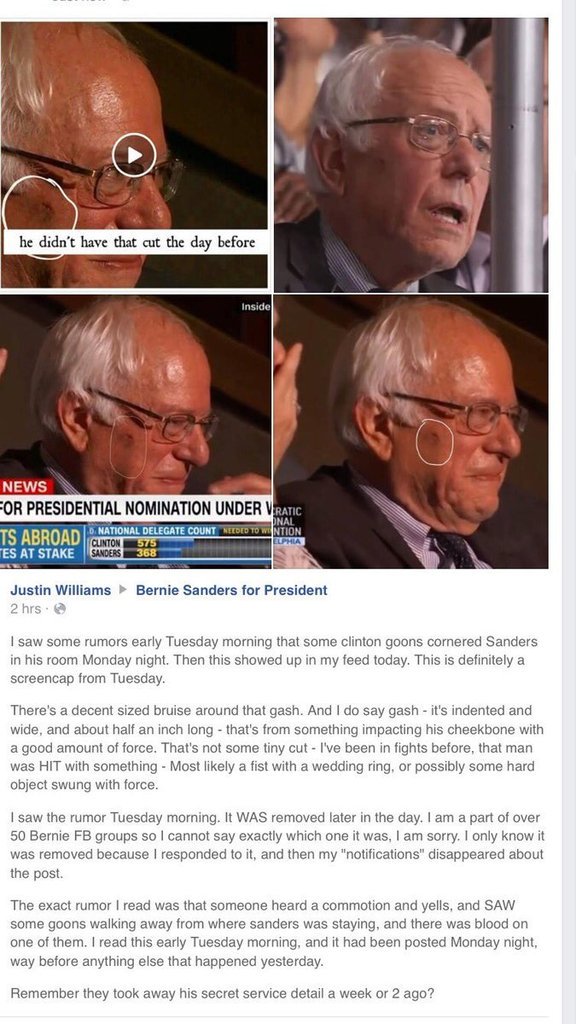 This issue is spreading very fast among Bernie  Sanders supporters and there is trouble brewing in and around the Democrat National Convention and the DNC over this.  Here’s one Facebook posting about it:

Just one day after this photo was taken, Senator Bernie Sanders QUIT the Democratic Party.  Strange thing for a man to do who has spent the last year campaigning for President as a Democrat.

Unless, of course, he got beaten-up by someone else in his own Party . . . someone with something to gain by his departure.

This is how Communists operate in politics and it appears the Democratic Party has become a full fledged Marxist outfit.  They are certainly NOT your parents Democratic Party.

I am a Spirit of Light working with energies on this planet on the Big Island of Hawai'i (for 15 years). My spiritual missions have taken me from the Big Island of Hawai'i to neighbor islands (Oahu, Kauai), as well as to Turtle Island (N. America), Peru (Cusco), Bolivia (Lake Titicaca), and Egypt (Gizeh, Saqqara, the Pyramids) (see my YouTube page).
View all posts by Kauilapele →
Gallery | This entry was posted in apocalypse, cabal, energies, new energies, partners in contrast and tagged Bernie Sanders, Democratic Convention, DNC, Hal Turner World News, Hillary Clinton. Bookmark the permalink.